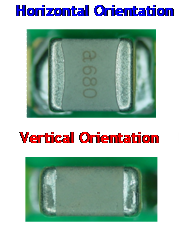 An increasing number of Modelithics CLR models now have the orientation selectability feature. This represents the physical orientation in which the surface mount component is attached to the pads. The change in orientation is a 90° rotation of the part along one edge of the part length. Capacitors show different frequency response depending on the mounting orientation, as shown in the plots to the right. An extra resonance is seen with the horizontal model simulation.

Excellence in Modeling Since 2001!


We value your feedback about our products and services